I Let My Daughter Smoke Cigarettes: What To Do When Your Children Smoke? 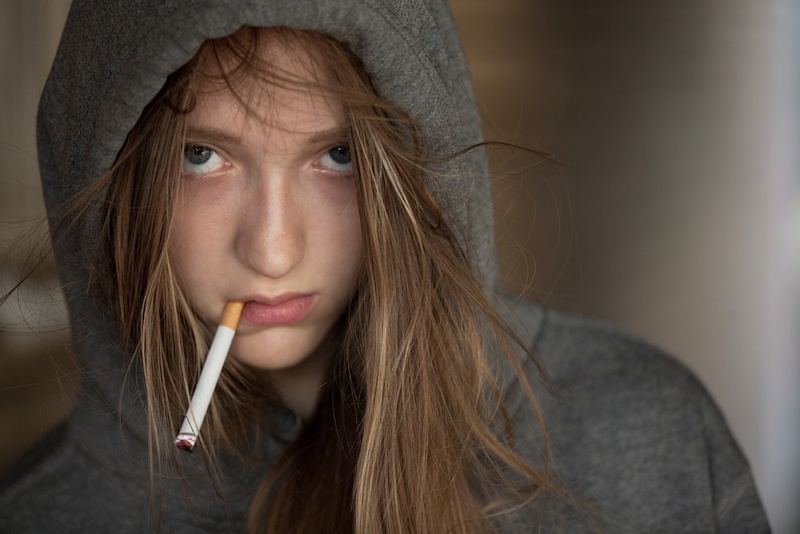 A pregnant mother who loves to smoke was asked by her 6-year-old daughter to let her puff on her cigarette. She allowed it, and then the daughter kept asking her to let her smoke again.

The daughter told her mom that she wanted her own cigarette, and her mother gave her. Since then, she had been smoking about a pack a day. The mother shared that she was somehow guilty at first but doesn’t think it’s not bad at all for her 6-year-old to smoke.

While she cut down to fewer packs a day because she was pregnant, she confessed that she thought she shouldn’t deprive herself. She expected that her new baby would want to smoke too, and she would be willing to teach her child.

This is an example of a child developing substance dependence and a mother that could be suffering from nicotine addiction. Here’s what smoking and nonsmoking parents should know about letting their kids smoke and what they can do to help them quit.

Nicotine is a drug that is very difficult to quit because it can alter brain function and structure at the very first smoke. It mimics dopamine, which stimulates the pleasure center of our brain. The brain then starts to associate substance use with feeling good, so the user would want to reach for another smoke to experience the feeling again and again. When a person who smokes tries to quit, he could suffer from withdrawal symptoms.

A study shows that kids can experience cigarette addiction within a day of inhaling their first smoke, similar to the symptoms of the six-year-old daughter in the story. While the mother felt guilty, she still let her daughter smoke as she too suffers from addiction. Research shows that people who do substance abuse may have distorted thinking, behaviors, and changes in their personality.

Their ability to make decisions, sound judgments, and control their impulses get highly affected. Since it’s too late for the mother to prevent exposing her daughter to tobacco products, the best course of action for her now is to help her daughter quit, and try to quit herself.

Studies show that smoking at a younger age can lead to an increased level of addiction. Kids experience the following symptoms within weeks or immediately after their first occasional smoking experience and before starting a regular habit:

Knowing the symptoms can help you, as a mother or as a father, become aware of what your young ones may be going through and determine how to best support them.

Should you let your kid smoke anyway?

Healthcare professionals advise against smoking due to serious health issues that can affect the smoker and the people around him and the high risk for nicotine addiction.

Malin Eriksson-Seitz, a mother who had battled nicotine addiction on and off, shared that she is strongly against her children smoking. She hopes that they never even try.

In her experience, the addiction never goes away, and that when you do break the habit, one puff of a cigarette is enough to get you hooked again. Quitting nicotine for her was more challenging than quitting heroin. As a mother, she hopes that her children would never touch a cigarette.

The risks of smoking at a young age

Aside from developing substance dependence early on, kids who smoke are at risk of becoming lifetime cigarette users. Statistics show that 90% of adult smokers began smoking when they were in high school.

The earlier they start smoking cigarettes, the less likely they will be able to stop. Once they start smoking, it is easy for them to develop tolerance and find that cigarettes have a diminished effect with continued use. With tolerance, they are more likely to progress to using more quantities.

Cigarettes and thousands of chemicals they contain pose health hazards for all stages of life. It is particularly dangerous for teens as their lungs have not yet fully developed. Based on studies, young smokers face various health risks such as:

How to help kids who smoke

Most often than not, parents who have just found out that their kids smoke or vape would want them to quit right away. Quitting does not happen overnight. To help your loved ones make healthier choices, start by creating a space where they can communicate openly and then, support them in their journey of quitting with these steps:

Understand why they smoke

“As someone who has smoked for roughly the last 20 years and is currently trying to quit, I think I would first sit down with them and talk about why they want to smoke. If you never start, you’ll never have to quit.” – Reddit User

It is normal to feel angry, disappointed, or scared and be reactive when you have just found out that your kid is smoking, especially if they broke the rules. Instead of scolding or punishing him right away, it’s best to start by creating a space where your child can open up to you.

There could be so many reasons such as they want to look cool, feel accepted by their friends, look tough, lose weight, or even, rebel against their parents. In some cases, children who smoke are copying their parents who do.

Ask your child why he has started. Try to withhold judgment, any comment you might have, and allow him to speak without interruptions. This will make him feel like you value what he has to say. Otherwise, your son or your daughter might end up defensive and distant.

Here are some questions that you can try asking your child:

This is a crucial step. Research shows that family influence increases the likelihood of child smoking. For instance, a female smoker, Kelly shared how she started smoking when she was 9 years old. She always watched her mom smoke, and she wanted to try. Her mother did not approve of it so she  had to hide it from her. But, after a year or so, her mother just let her be.

Karl Hill, director of the University of Washington’s Seattle Social Development Project and an associate research professor of social work said that parental smoking is the biggest contributor to children initiating smoking.

If you are a parent who smokes and doesn’t want his sons or daughters to do the same, then it’s time to consider quitting. If you are not ready to quit yet, at the very least, don’t smoke in the presence of your kids, but start planning how you can quit. Several studies found that kids of smokers are twice more likely to smoke compared to kids of nonsmokers.

When parents who smoke make a step toward breaking their own patterns, they can influence and support their young ones better in doing the same.

Know the risks and educate them

Maximize the resources around you. You can easily search for information online that can help you teach your kids about smoking and its consequences. You can check online publications or look for relevant videos that you can watch together. This will paint them a clear picture of what health complications are associated with cigarettes and vaping.

Alternatively, you can seek help from family and friends who have smoked and let your child talk to them, just like this advice. Your child may be more likely to believe a long-time smoker who isn’t you.

A teacher also shares her advice on educating young people on the risks of smoking. She suggested taking your daughter to the cancer ward of a hospital. Tell the administration that you would like to educate her on the dangers of smoking.

There are many ways of helping your kids become aware of the dangers of smoking. Make sure that they understand the health risks, and answer any questions that they may have. At their age, they may not really think that far into the future to worry about the complications of smoking.

Help them make a plan

What action steps are needed to help them quit smoking? Start by asking them if they are ready to commit to quitting. You can establish a quit date and mark it on a calendar together. Set rules that you both can agree on.

Discuss getting rid of their cigarettes, lighters, or e-cigarettes. Help them avoid temptation. Establish a smoke-free rule in your house because the mere scent of cigarettes can trigger their cravings. Don’t allow anyone, even other family members, to smoke inside the house at any time.

At school, teach them that it’s okay to refuse to smoke when a friend invites them to smoke.

Get advice on different smoking cessation methods that your son or daughter can do. They may be recommended to use quit smoking medications such as nicotine replacement patches, gums, lozenges, inhalers, and nasal sprays.

Your doctor can also help you Prepare to help them through withdrawal symptoms such as cravings, restlessness, mood swings, depression, headaches, lack of energy, increase in appetite, dizziness, and constipation.

Remind them of the benefits of quitting

As we often focus on the dangers of cigarette smoking, remind them too of the benefits of quitting to keep them motivated and to help them appreciate their journey to becoming smoke-free.

Refocus their attention to healthier options. Your daughters can enroll in activities that they can enjoy and keep them preoccupied, such as a swimming class or a dancing class. On the other hand, you can get your son to play basketball with his dad.

Several studies show that hypnosis is an effective treatment for cigarette dependence or nicotine addiction. Your kids can start quitting at home by downloading a hypnosis app that can help them quit smoking. It has an easy-to-follow quit smoking program and a tracker to help you check your progress.

Your support and understanding are what they need now more than ever. Help them build their confidence, even when they slip from the plan. Tell your kids that you believe in them, that you are proud of them, and that you will be with them every step of the way. Affirm them for their efforts, and celebrate successes whenever possible.

Should I allow my child to start smoking?

What should parents who smoke do if they don’t want their child to smoke?

Children who have parents who smoke are more likely to become smokers. It is highly recommended for parents who smoke to start considering smoking cessation plans and quit. It will not only be beneficial to their health, but they will also set a good example for their kids to help them quit.

Is it safer for my son, who is 12 years old, to vape instead of smoke?

No, it is not. Vape or e-cigarettes still contain nicotine which is a highly addictive substance that can harm your health and affect your brain function.

← Prev: Top 5 Drinks & Smoothies to Supercharge Your Detox From Smoking Next: Why Does Smoking Make Me Poop: What Research And Experts Say →

How to Pray to Quit Smoking: Breaking Addiction with Prayer And Other Tools

If you're a smoker who's also spiritual, you may wonder if you should pray to quit smoking.  The short answer is...

I Started Smoking for My Husband Years Ago: How Do I Quit This Addiction?

Cathy started smoking cigarettes years ago for her smoker husband named Paul. He always had a smoking fetish as a... 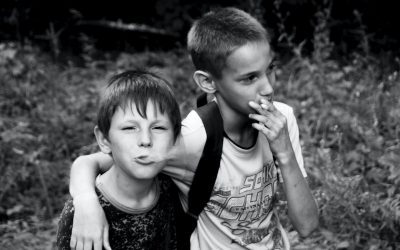 I Let My Son Smoke Cigarettes: Is It Too Late to Help Him Quit?

For this Reddit user, his son’s smoking addiction started early: at only 13 years old. His son was already 15 years...